What a blessed day! 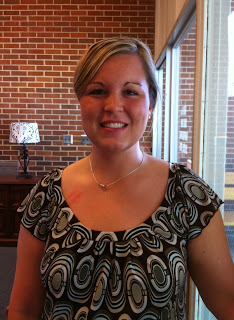 Mrs. Amanda Price
This morning we arrived early at Chilton County High School we were greeted by Amanda Price, who is the wife of Chaplain Erric Price of Chilton County Sheriff's Office. Amanda told us  that Erric shared with her what a blessing we were to Erric yesterday. I turned it right around telling her how much of a blessing it was to connect with Erric so we can reach the Chilton County Responders! Amanda then proceeded to tell me that her father is the head of Anglican Chaplains and that he is just 30 minutes north and teaching at an ICPC Training at Shelby County Sheriff's Office Training Center. I immediately called the Bishop and the rest is history. We decided to go to the Training and connect with the Chaplains.

Having run out of Psalm 91 books, I called on Commander Phil Burnette of the U.S. Corps of Chaplains, who offered to help us while we are up here in Clanton in any way we need. What an angel he has been. He met us with several cases of Psalm 91 books for Military and for Toddlers and we took them all!  And after consulting with Phil, we decided to go visit the Police Chiefs of Thorsby and then of Jamison before going to the ICPC training. 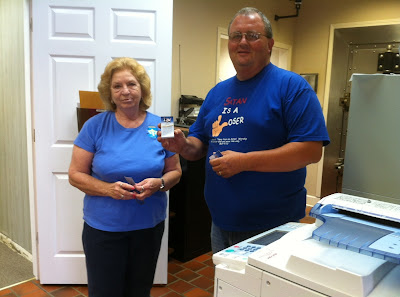 Youth Leader Terry Jackson with another staff person of Thorsby City Hall
She took Ps 91 cards for National Day of Prayer in Thorsby!
Talk about a day of Divine Connections! When we arrived at Thorsby City Hall, the Police Chief had just gone out on a call. But it just so happened that the Youth Leader, Terry Jackson, was at City Hall as well as a dear lady who told us that they will be celebrating the National Day of Prayer at the Church across the street tomorrow and we gave them Psalm 91 cards for all who will attend. They were so grateful! But besides that, the Terry was very interested in "Catch The Cause" and took sign up sheets for his Pastor and the youth! 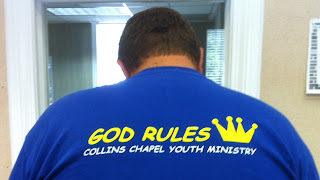 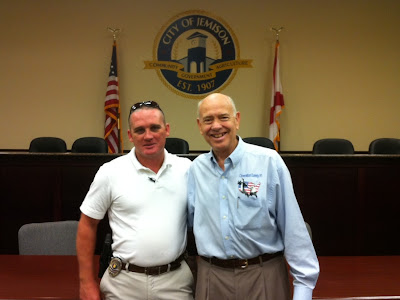 Jemison, AL Deputy Chief Mark McMinn and Ed
Then north to Jemison. We went to see the Police Chief and the Deputy Chief Mark McMinn came out to greet us. Not only did Deputy Chief Mark accept the Psalm 91 cards and books, but he so graciously gave us a tour of the entire Police Complex and we were able to share not only our mission with him, but learned so much and shared many experiences. BUT...the best is yet to come: Deputy Chief took us in to the Library which is a part of the building and Ed began a conversation with the librarian who suggested we get all the Churches and Responders together and when he heard what we are doing with "Catch The Cause" and about the Assembly we did at Chilton County High School, Deputy Chief said to us that we can use the beautiful, spacious meeting room that is a part of the complex. We are to let him know about two weeks in advance of our coming and he will arrange the whole event! Now that is what I call "God's favor"!!! 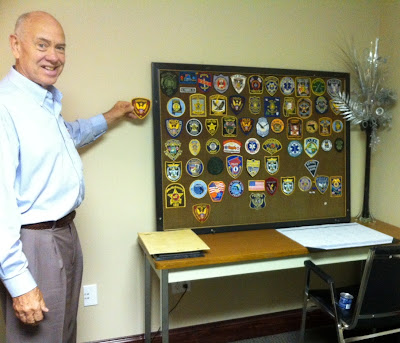 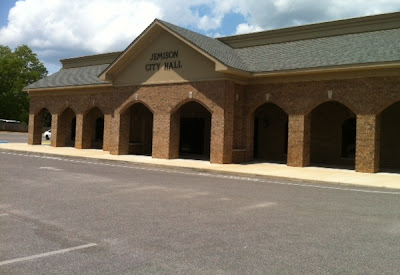 We are so excited about coming back here to spread the Psalm 91 message among the Responders, Chaplains, Pastors and residents of Chilton County.This has been a trip full of Divine Connections! Next post: the ICPC Training today.
Posted by Operation Safety 91 at 10:08 PM