OS91's beautiful stage this year thanks to Vera Clark of
Baldwin Fairchild, Flowers For You, and Colonial Flowers
Operation Safety 91's 4th Annual Tribute to Honor America's 1st Responders was held at the Rosen Centre in Orlando on September 30th, 2011. With about 475 in attendance not only from Central Florida but also from Jacksonville, Georgia and New York, it was truly a day to remember. This year's Event specially commemorated the 10th Anniversary of 9/11, and the 343 Firefighters who died in the Twin Towers. 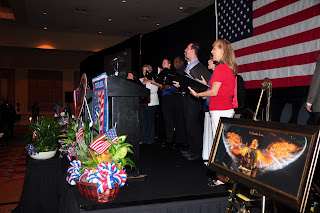 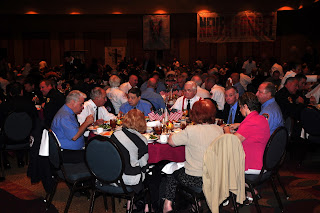 Every attendee received a plastic Psalm 91 card plus other goodies at their place. 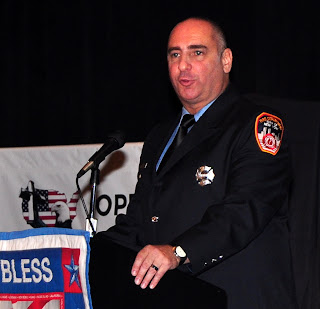 Keynote Speaker John Picarello, FDNY (Ret.)
You could have heard a pin drop as retired NY Firefighter John Picarello told his story of being in the Lobby of Tower 1 on that fateful day of 9/11, when 104 stories imploded on him and he walked out without a scratch. John emphasized to all the Responders present to seek God's protection on a daily basis, in all circumstances.


While the Event was going on in the Hotel, the U.S. Honor Flag was being transported to Orlando. 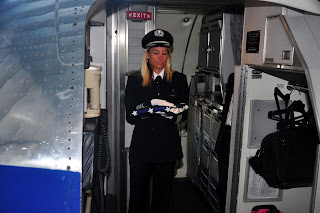 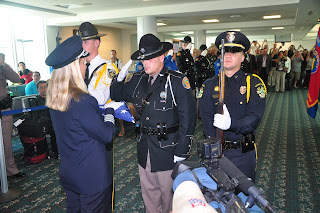 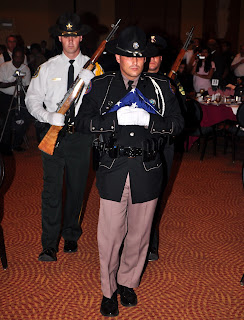 Grand entrance of U.S. Honor Flag
into 4th Annual Tribute Hall of Heroes
We were honored this year with a visit from the U.S. Honor Flag, which flew over Ground Zero until the last shovel of remains were removed. USHonorFlag.org The Honor Network President and Co Founder, Chris Heisler, was approached several months ago by NY OS91 partner, Al Castro, Founder and President of NY Regional Police, newyorkregionalpolice.org and Founder of God's Shield of Protection Police Officers Ministry godsshieldofprotection.org and arrangements were made for this great American treasure to be featured at our 4th Annual Tribute. 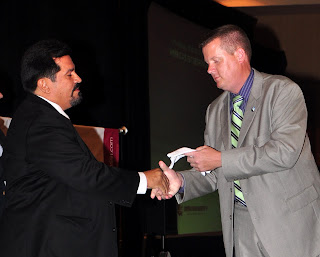 After speaking Chris Heisler (right) presented Al Castro
with a pair of white gloves used for the U.S. Honor Flag 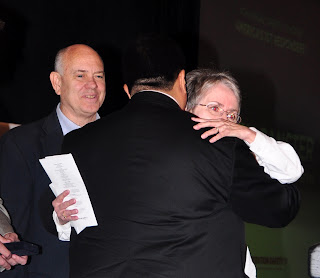 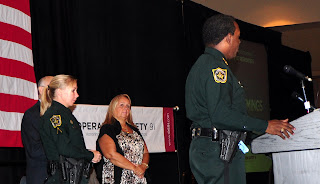 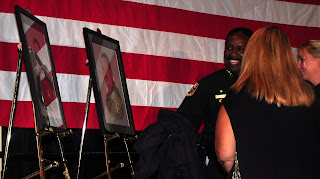 Portraits unveiled
Following the Flag Ceremony was the 3 part Memorial. Orange County Sheriff Jerry Demings presented the widows of two Orange County Deputies with a Portrait of their husbands, fallen in the line of duty. Cheryl Heber was presented with the portrait of Deputy Craig A. Heber, Master Aviation Pilot. Deputy Virginia Coates, currently serving in OCSO,  received a Portrait of her husband, Deputy First Class Brandon Lee Coates. http://marygansterartist4responders.blogspot.com/

Orlando Fire Department and Rosie O'Grady Bagpipers
Next, Amazing Grace was played by OFD and Rosie's Bagpipers...a very emotional moment for all. Their performance was absolutely outstanding and OS91 is so grateful to all of them! 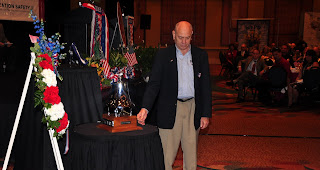 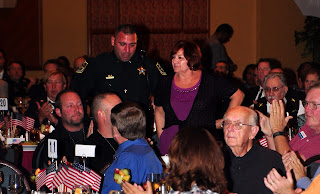 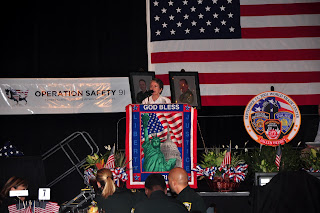 Mary Ganster: "God is our Protector!", speaks on Ps 91 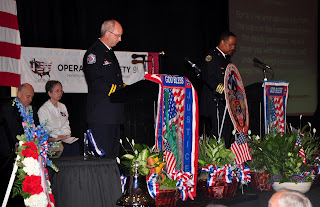 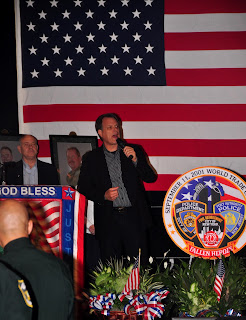 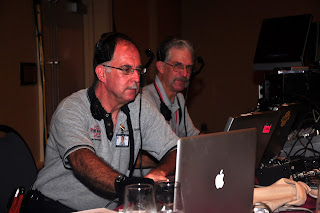 Special Thanks to our A/V Crew:
Dave and Slater Cohen of Central Florida Fire Academy 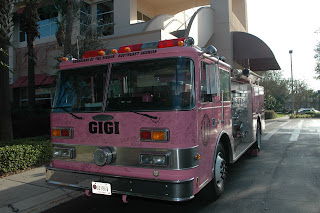 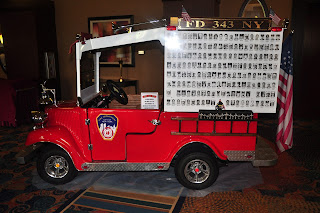 Special Thanks to Bob Ogren for bringing his 343 Cart
Bob Ogren, the father of one of the Firefighters who lost his life at 9/11 has dedicated his life to honoring the memory of not only his son, but also of all the 343 brave Heroes who lost their lives at the Twin Towers. This is a mobile memorial cart resembling a Fire Truck. Thank you, Bob, for bringing this cart to OS91's 4th Annual Tribute! FD343NY.COM

Special Thanks to our Silver Sponsor:
DRS Technologies 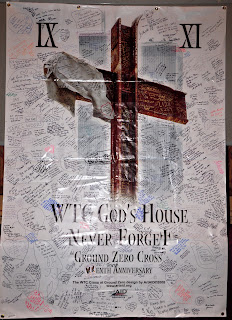 Special thanks to:
Emcee: Brian Brightman
Scott Smith of Avalon TV
All our Volunteer Staff : We couldn't have done it without you!

Also special thanks to Richard Shanley for his photography both at the 4th Annual Tribute Event
and at Orlando International Airport for the arrival of the U.S. Honor Flag.
To contact Richard for your picture: memoriesoneclickatatime@yahoo.com 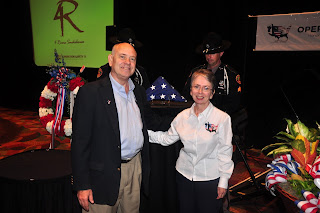 Ed and Mary Ganster before the U.S. Honor Flag