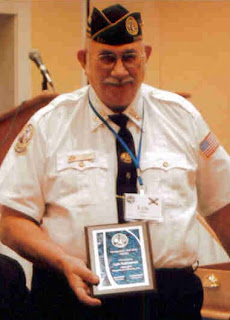 Chaplain Lyle B. Schmeiser, DAV Chapter 16 of Orlando
Veteran of the Year Award 2009 - 2010 was presented to one of Operation Safety 91's Founding Chaplains, Lyle B. Schmeiser, Chaplain of Chapter 16 Orlando DAV on June 11, 2010 at the Disabled American Veterans Florida State Department DAV/DAVA Conference at the Orlando Lake Mary Marriot Hotel. Also awarded to Chaplain Lyle at the same Conference was the Local Veterans Assistance Program Award for over 3800 hours of Volunteer Service! Congratulations to our Chaplain Lyle! We are so proud of you! 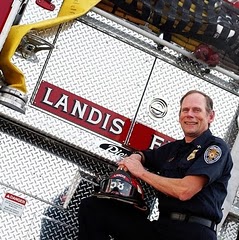 David Barlow, Captain 5802
Landis Fire Department, NC
The books are going well.  I have two boxes left of the Military Version.  I also have not forgotten your offer to tell the story of how I am using them and distributing them.  I wanted to share this with you.  Tomorrow afternoon (6-26-10) I will be attending a Fire Department Recruit class Graduation for the City of Concord Department of Fire and Life Safety and will be providing books for the graduates and their families.  I have taken the liberty of writing up a brief flyer that explains how these have been provided.  I also have the permission of the Principal at our High School to place a shelf on our Fire Service Memorial Wall along with a sign offering the books for anyone that may like one.  I also have been giving the books to all of our guest speakers that have been visiting our classroom.  Everyone has been very receptive and love the books.  I also gave copies to all the veterans (staff and teachers) on Memorial Day.  I would like to request 6 more cases of the Psalms 91 Military Version so that I can distribute them on 9/11/10 at the 9/11 Memorial Service that is to be held at Concord Fire Station #8.  My CHS Fire Academy Honor Guard is to participate along with the Honor Guards from Concord Fire and Life Safety, Concord Police Department, Cabarrus Sherriff's Department.  We will be dedicating a piece of the World Trade Center in the memorial on that day and we should be receiving good press coverage.
Some really good news is that my fledgling Fire Academy with its 21 students has grown and next school year we have 122 students signed up for the program.  Check the Blog this next week for some new updates.  www.chsfireacademy.blogspot.com
Thanks again for all that you do.
David Barlow
Chief CHS Fire Academy
www.chsfireacademy.blogspot.com
Posted by Operation Safety 91 at 9:59 AM 0 comments

Your Mission, Should You Choose to Accept it

Your Mission
Should You Choose To Accept It....
The Iraq & Afghanistan Veterans of Polk County in conjunction with the Polk County Veteran's Council would like to invite you to a patriotic Themed "Warrior Walk" around beautiful Lake Hollingsworth in Lakeland, Florida.

The purpose of this event is to honor our U.S. Soldiers, Sailors, Airmen and Marines who have been killed in action while serving during Operation Iraqi Freedom or Operation Enduring Freedom in Afghanistan.

If you are interested in participating in the non-competitive walk to honor our fallen troops, please click "SIGN UP TO WALK" at website: www.warriorwalklakeland.com. The first 250 registrants will receive a FREE t-shirt the day of the event.


This nation will remain the land of the free, only so long as it is the home of the brave. -Elmer Davis

Labels: Should You Choose to Accept it, Your Mission 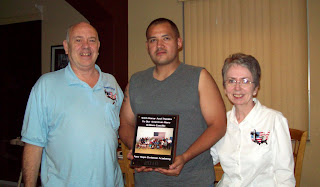 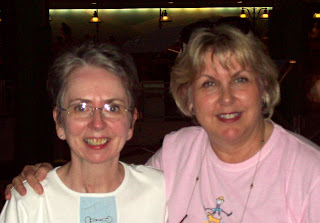 Operation Safety 91 Founders, Ed and Mary Ganster, welcomed Renee Wilson of the 1687 Foundation to Orlando, FL on Sunday, June 6th, inviting Ministry heads who are their partners to join them. Thanks to the generosity of the 1687 Foundation, OS91 and its partners have been able to distribute well over 500,00 Psalm 91 and other free resources throughout the US and to our troops in Iraq and Afghanistan.
Posted by Operation Safety 91 at 8:33 PM 3 comments


Reverting back to the memorial service for Comrade Roy L. Wiggins USMC Vietnam War HERO which was held at the Baldwin-Fairchild Funeral Home in Altamonte Springs Florida, which I helped plan and ultimately conduct the first week of December 2009, after which I wrote....for the FIRST time in my LIFE....a thank you letter to a funeral home.....because I was so impressed with the outstanding manner in which they handled Comrade Roy's service from the beginning all the way through to the burial of Roy's remains....which...for another FIRST time in my LIFE....because my wife and I were picked up at the Wiggins home that morning by Mr. Tim Hart, (a new found friend/ Comrade/ Brother) driver of the family limousine..... I was a witness to the complete burial of Comrade Roy's casket.
The excellent professional way they helped a very large group of grieving comrades and friends and family to cope with the tremendous loss we ALL experienced because in spite of the fact that Roy was diagnosed with cancer he was at one point in remission and we all thought he was going to get well but instead took a turn for the worse and died suddenly.
The two page letter of gratitude that I wrote the funeral home was well received as well as shared with other Baldwin-Fairchild funeral home directors and the end result of that came in the form of an invitation from Sally Kopke of the Baldwin-Fairchild Oviedo Chapel in Oviedo Florida addressed to: Chaplain Lyle Schmeiser, DAV Central Florida Chapter 16, Orlando Florida 32805.....On behalf of Baldwin-Fairchild Cemeteries, Funeral Homes & Crematory you are cordially invited to be our special guest(s) for our solemn and traditional Memorial Day Service 11:00AM, Monday May 31st @ Glen Haven Memorial Park, 2300 Temple Drive, Winter Park Florida 32789.
Upon the arrival of my wife and I we are invited into the main office building and in a room off to the side they had set up a "banquet" fit for the King and Queen of England.... compliments of the funeral home catered by Sam Walton's Club!!!
At the prescribed time...11:00am....we were escorted to and seated in the VIP tent....front row seating to witness an OUTSTANDING performance of DOZENS of ROTC Cadets, Boy Scouts, military personnel and various veterans organizations reenacting EVERYTHING from the Civil War all the way down to the present war on terrorists in Afghanistan.
A standing room only packed out crowd witnessed one of the most interesting, moving, emotionally charged, yet solemn and traditional memorial services I have EVER had the privilege of attending.
AWE-STRUCK.....Two things that stood out the most in my mind was when (1) the ROTC group re-enacted the...five US Marines and one US Navy Corpsman raising the Flag of the United States of America atop Mount Suribachi during the Battle of Iwo Jima during WW2...2/23/1945...
(An ironic fact: Those six HEROES on Iwo Jima(1945) were not very much older than the ROTC' youths who were reenacting their brave action...Memorial Day 2010)!!! (2) The POW-MIA Honor Guard paying tribute to America's MANY Prisoners Of War and Missing In Action from all wars. As each war was introduced they gave the ASTOUNDING numbers still unaccounted for from each war beginning with World War Two on down to the present, the Gulf War on terrorists.
Tribute To Veterans---Veteran Unit Wreath Laying----As the names of the various organizations were read a representative was permitted to come forward to place a bouquet of roses on the Memorial Table.....what a genuine exhilarating moment it was when Emcee Bud Hedinger announced; Disabled American Veterans Central Florida Chapter 16....and I stepped out smartly...PROUDLY...to represent an organization which I have been a Life Member for twenty five (25) years (in three states, Colorado, Montana and Florida)!!!
What an HONOR, what a PRIVILEGE it is to serve...service to mankind....Veterans Helping Veterans!!!
God Bless America and God Bless all who read this letter!!!