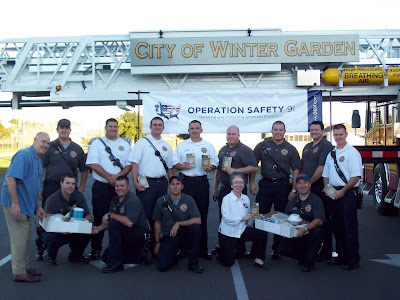 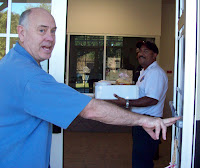 OCFR Station in Oakland
gratefully receives Thanksgiving Dinner from OS91
Then on to Winter Garden Fire Rescue Department where Battalion Chief Brian Sanders with on-duty Firefighters from Stations 22, 23 and 24 gathered at Station 24 to receive their home cooked meal compliments of cook, Ed Ganster, and Mary and to celebrate Thanksgiving together, eating all they wanted! How did Winter Garden Fire Rescue say Thank you? We got a lift! Take a look: 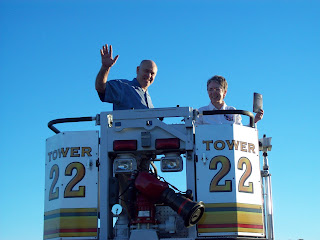 Things look different from up here! 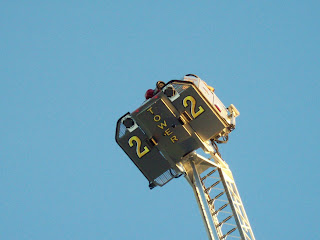 And here!
Ed and Mary were hooked up and accompanied by LT. Ken and lifted to new heights, where they could get a bird's eye view of north, south, east and west : we believe a spiritual sign that God is expanding Operation Safety 91. Already in about 26 States, Iraq, Afghanistan, Japan, Mexico, South Africa, Philippines, Puerto Rico, Jamaica, etc. with approximately 750,000 Psalm 91 books distributed through partners, OS91 is now taking on a new project: production and distribution of Psalm 91 prayer cards to Responders. This undertaking has been a three year dream of Ed and Mary Ganster and the original vision behind their founding Operation Safety 91 in 2008. 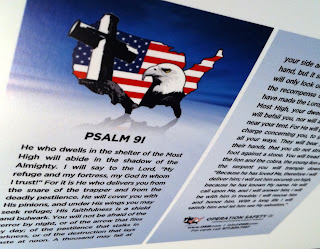 Psalm 91 prayer card proof
The size of a credit card or gift card, OS91's new Psalm 91 prayer card will be a very sturdy plastic card with the prayer on the front and back. It will withstand the rigors of Responder life and as a pocket size card can be kept handy for use. Responders who have read Peggy Joyce Ruth's God's Shield of Protection, Psalm 91 for Military, know already of the countless testimonies of the miraculous, supernatural protection of those who stand on Psalm 91.
100,00 cards are currently in production and are expected to arrive here the second week of December. We are now diligently working on notifying Responder Chaplains and OS91 partners of their arrival and taking orders. The cards are absolutely free, including the shipping, and can be ordered on http://www.os91.com/contact.php or by calling Toll free outside of Orlando: 877-820-7467 or locally: 407-484-4506. We request that these plastic cards be given to Responders only. Regular cards like business cards will also be available with Psalm 91 for civilians. These are also in production.
Again, all cards are absolutely free, but we do welcome donations because our goal is 5 million cards to Responders as soon as possible. $1 makes and ships 10 cards. We need partners to help us accomplish such a big vision. What a blessing to be able to give the gift of God's protection to those who put themselves in harm's way daily for our safety! For gifts of $25 or more you can very conveniently use your credit card on the OS91 website donate page:  http://www.os91.com/donate.php


All other donations can be made payable to:
Operation Safety 91
13750 W. Colonial Drive, Suite 350
Winter Garden, FL 34787
No donation is too small or too big! Just think: approximately 11 cards can be made and shipped for $1! Where else can you receive such a wonderful return on investment! You will only know in heaven how you have helped a Responder! What a great way to say "Thank you" to our Public Servants.
Posted by Operation Safety 91 at 12:33 PM 0 comments

Last evening Ed and I had dinner with COL Danny McKnight and his wonderful wife, Linda. What a privilege! We spent four hours together and Danny will help Operation Safety 91 move forward in its mission of Honoring and Protecting America's Protectors. Linda gave a donation to OS91 for the Psalm 91 cards.
COL Danny McKnight retired in January 2002 after serving 28 ½ years in a distinguished and highly decorated career as a U.S. Army Ranger. His experience represents a lifetime of dedication to the defense of America.
COL McKnight'’s final assignment was as the Chief of Staff for First Army, based at Fort Gillem, Georgia. His efforts as the Commander of the 75th Ranger Regiment elements assigned to Task Force Ranger in Mogadishu, Somalia were chronicled in the book Black Hawk Down and the movie by the same name.
In addition to his expertise in many military matters, highlights of his skills in the leadership and management aspects of his career include:
• Providing direct financial management, guidance, and oversight of an annual
operational budget of approximately $50 million.
• Developing a strategic planning concept and a measurable results program to
track its successful implementation for the integration of active and reserve
component soldiers as part of the Army’s training strategy for the year 2000
and beyond.
• Directing a staff of more than 200 military and DA civilian personnel to
provide support for a field force of 10,000 people, who had to meet the
training requirements for approximately 250,000 reserve component
soldiers.
COL McKnight also has had extensive experience in the areas of communications, public affairs, and emergency management.
COL McKnight’s awards and decorations include the Legion of Merit with Two Oak Leaf Clusters; Bronze Star for Valor; Purple Heart; Meritorious Service medal with Five Oak Leaf Clusters; National Defense Service Medal with Bronze Star; Armed Forces Expeditionary Medal with Arrowhead and Bronze Star; Combat Infantryman’s Badge; Ranger Tab; Master Parachutist Badge with Combat Star; and Pathfinder Badge.
He graduated from the U.S. Army War College, Air Command and Staff College, Infantry Officer Advanced Course, Ranger School, Airborne School, and Infantry Officer Basic Course. He also served as an Assistant Professor of Military Science in the University of Florida Army ROTC Department.
COL McKnight earned his Master’s Degree in Higher Education and Administration from the University of Florida in 1985, and his Bachelor’s Degree in Management from Florida State University in 1973.
Posted by Operation Safety 91 at 8:04 PM 0 comments 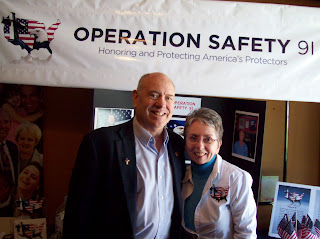 Ed and Mary Ganster at CFI Church
Pastors Gerry and Donnelyn Khourie opened their hearts and their Church, Christ Family International Church in Port St. Lucie to OS91 today (11/14/10), inviting Ed and Mary to come and speak during both Services. The results were phenomenal! Because of the generosity of their Church OS91 can make more than 13,000 Psalm 91 cards for Responders! 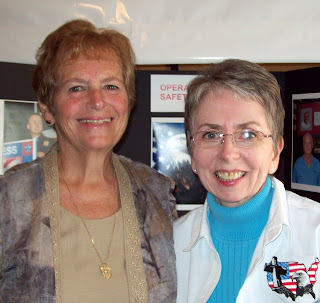 Mary with widow of fallen Firefighter
Posted by Operation Safety 91 at 8:01 PM 0 comments

Admiral Vern Clark at the Christian Chamber of Commerce 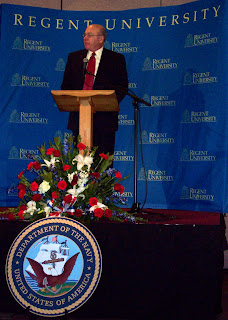 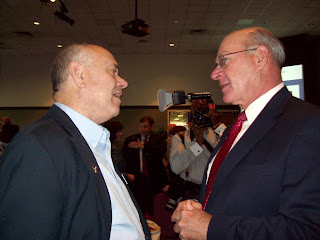 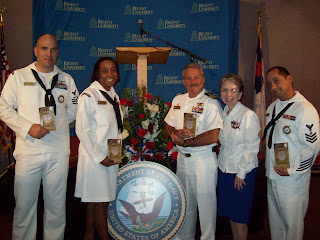 Ps 91 for Military Books by Peggy Joyce Ruth for Sailors
given out at the Chamber Luncheon
Posted by Operation Safety 91 at 8:50 PM 1 comments

Labels: Admiral Vern Clark at the Christian Chamber of Commerce 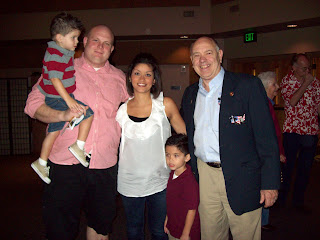 The Griffin Family with Ed Ganster
The Church of the Messiah in downtown Winter Garden honored our brave Veterans with a free Dinner and Musical Presentation on the eve of Veterans Day. Dave Gillum, Music and Facilities Coordinator lead a concert production called "Homeland" and all were moved. This was an outstanding concert about the USA which honored our Veterans, emphasizing that this country was founded on the principle "One Nation Under God". The Concert was preceded  a delicious picnic style dinner. Guests of honor were 2 recipients of mortgage free disability friendly homes built by "Home At Last": Specialist Marcus Griffin, a 5 year US Army Veteran hero who sustained serious injuries in a IED explosion and his wife, Andrea and 2 boys Isaac and Joseph; and Sergeant Major Patrick Corcoran, a 23 year US Army Veteran who sustained serious injury when his vehicle was hit by and IED and his wife, Becky. 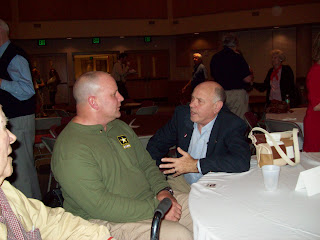 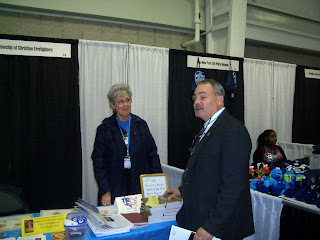 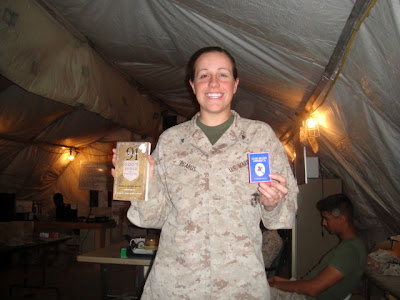 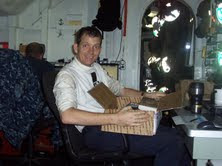 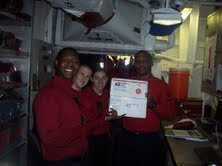