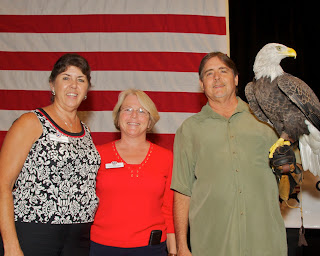 
Operation Safety 91 has been blessed with a wonderful helper in the person of Blue Star Mother, Vickie DiGiovanni, proud Navy momma to Ensign Zach DiGiovanni and President of the Blue Star Mothers of Central Florida http://www.bluestarmothers.org/join  We want to thank Vickie publicly for being such a support to OS91 Founders, Ed and Mary Ganster. Vickie is the volunteer every Organization dreams of: gifted, skilled, with a heart to help wherever needed. As if she has no other commitments, Vickie spent a full 2 hours with Ed and Mary today, planning a smooth running 4th Annual Tribute to Honor America's 1st Responders.

Another volunteer, Korie Kapal of Florida Family Policy Council http://flfamily.org/  has also offered  her expertise to make sure the 4th Annual Tribute run without a hitch. Korie blessed Ed and Mary about 5 weeks ago with her willingness to share her expertise. Thank you, Korie!

These 2 wonderful ladies, together with up to 58 more willing people who are friends of OS91 are going to make this 4th Annual Tribute to Honor America's 1st Responders THE best Tribute Event EVER...and God will receive the glory! 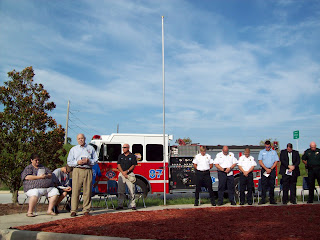 Ed Ganster leading Invocation at Flag Raising
New Hope Christian Academy holds a special place in the heart of Operation Safety 91's Founders, Ed and Mary Ganster, who have been on the Board of Directors for about 4 years. We have accompanied this wonderful Christian Educational Program and its founder, Mrs. Angi Pitt, and her wonderful husband, Rusty, through different and sometimes difficult seasons of growth and development. After 8 years and beginning with one student, New Hope Christian Academy was blessed to purchase a new campus, a prime piece of property in Minneola, FL, over the summer and today was the first day of school! A Flagpole which stands proudly in front of the Academy now, after over 3 years of standing bare, is proudly flying the U.S. Flag. Of course we made this an Event, inviting Minneola Mayor Pat Kelley who was represented by Vice Mayor Rick Roderick. Also attending were Minneola City Manager Mark Johnson, Minneola Fire Chief Derryl O'Neal with 3 of his Firefighters as well as Lake County Sheriff's Office LT Link. 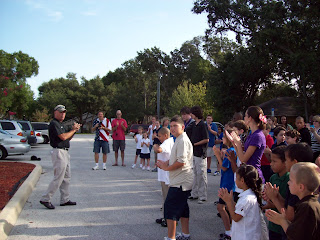 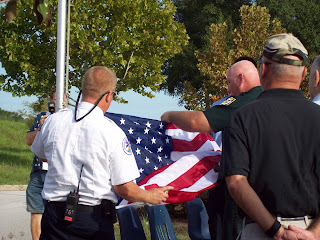 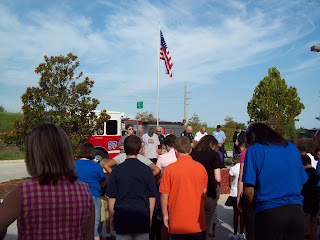 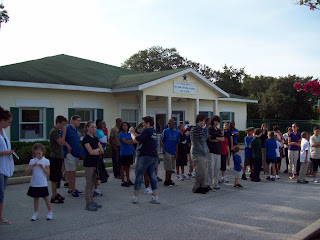 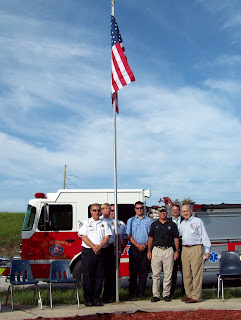 After the Ceremony, Responders and Officials were invited in for donuts and coffee while Mrs. Angi explained the advantages of the ACE Curriculum as well as NHCA, speaking about many former students who have gone on to serve our Country and then pointing out one student present who is planning to go into the Marine Corps. Instantly, Vice Mayor Roderick who proudly served in the Marines jumped up, took off his Marine Corps lapel pin and put it on that student! It was a moment that brought tears to the eyes! 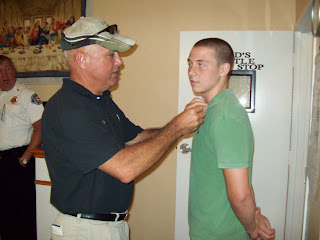 V. Mayor Rick Roderick giving his Marine Corps Pin
to student planning on being a Marine

The new campus of New Hope Christian Academy is located at 105 E. Baker St. in Minneola, FL and their website is www.newhopeca.org
Posted by Operation Safety 91 at 11:58 AM 0 comments

This video is powerful and true! Thank you to all our brave men and women Firefighters! We love and appreciate you so much and pray for you daily! OS91
Posted by Operation Safety 91 at 7:15 PM 0 comments

From an email to OS91: "I have been led by the Holy Spirit to approach and talk to every law enforcement officer I see in public. I walk up to them, introduce myself, thank them for their service, tell them we are praying for them and give them a plastic Psalm 91 card.

My prayer is that the officers I meet will tell others and the Word will spread. My vision is still that every law enforcement officer in this County will have an opportunity to wear and carry the God Bless America Cross and Psalm 91 card. The Wed. and Thurs. night chapel volunteers have been given a cross and card. I now wear the cross pin on my hard ID card that allows to enter the jail day or night but just passing it by the scanner. By the grace of God, to my knowledge, I am the only chaplain allowed to take a guitar into the jail.

We have been having amazing services on Wed. night. The fire of God is falling and men are falling to their knees, crying out to God for forgiveness, accepting Jesus as their Lord and Savior. Revival fires are spreading throughout the jail. 1,000 inmates a month hear the Gospel of Jesus Christ! Groups are coming from all over the nation to observe our chapel, drug dorm, spiritual dorm and other programs. A number of years ago we were having 79 reports of inmate on inmate violence per month. The first 6 months of 2011 we had 3!   One reason, Jesus!"
Posted by Operation Safety 91 at 2:05 PM 0 comments

Joe was a friend and advocate for Operation Safety 91. We truly appreciate what he did for us, going to businesses he knew to raise money for the 4th Annual Tribute to Honor America's 1st Responders. Joe believed in our mission and vision and his passion was to help. He will touch countless Responders after his death because of the Scutero family's gracious gesture of donations to Operation Safety 91 in lieu of flowers. May he rest in peace!
Posted by Operation Safety 91 at 12:36 PM 0 comments