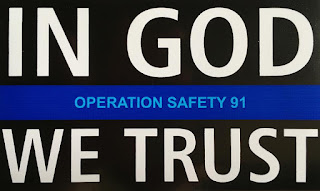 Operation Safety 91 is supporting Law Enforcement and these other Responders and Officials as they boldly and bravely lead the way in this ever growing “In God We Trust” Movement. OS91 has made a 3” x 5” “In God We Trust” thin blue line, car window decal and we ask you to Take A Stand for God and our National Motto with us! Put this decal on your vehicle window, resisting the opposition, not negotiating, not capitulating! Together we need to fight this battle against godlessness until this country again belongs to God!
Posted by Operation Safety 91 at 1:26 PM