What One Youth Can Do - Part 3 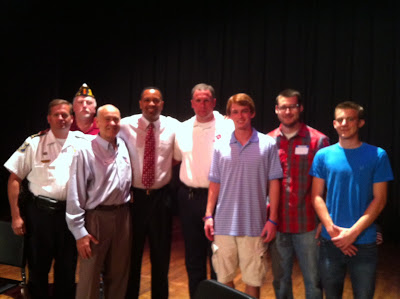 Operation Safety 91 visited Chilton County High School (CCHS) in Clanton, AL today for an Assembly with Faculty and approximately 800 students. This Assembly was held by the Christian Youth Group, "Youth Alive", in CCHS. We sincerely thank Principal Mr. Greg DeJarnett, who was so very gracious in welcoming OS91 through Mason, Vice President of "Youth Alive".

At 10:50 a.m. students and Faculty began coming into the auditorium while patriotic music played. Everyone was handed a U.S. Flag. Then at 11:00, Ed Ganster, Founder of Operation Safety 91, along with Clanton Police Chief Brian Stilwell, Clanton Fire Chief David Driver with his Lieutenant, and the National Commander of the U.S. Corps of Chaplains, Commander Phil Burnette, alumnus of CCHS (1984) processed to the stage. Next the prelaunch video of "Catch The Cause" was debuted on the 2 giant screens and applause erupted as it ended! 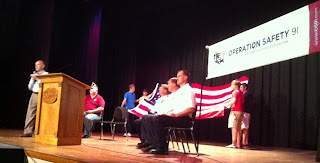 Then, as a salute to America, OS91's giant 8' x 12 ' U.S. Flag was opened and held by six members of "Youth Alive",  as the entire student body waved their hand held Flags for the playing of "Stars and Stripes Forever".

Ed then introduced Operation Safety 91 as students listened. When Ed asked those students and faculty who have relatives who are Responders if they would stand up, it was a moment to remember! Almost every one of the more than 800 students and Faculty stood up! (I took quick pictures of this moment, but the lighting was down and the photos don't really give the full effect by any means.) 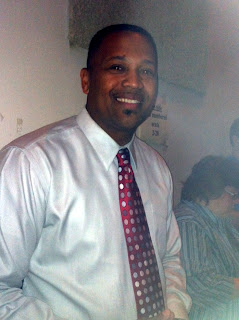 CCHS Principal Mr. DeJarnett, also
the son of a Vietnam Veteran
At this point, "Catch The Cause", our new campaign to take Operation Safety 91's mission "to honor and protect Responders" across America through interactive community events, education, and social networking was introduced for the first time in a High School. Of course, as well expected, CCHS students are BIG on social networking, and patriotism is a way of life here in Clanton. So Ed issued a challenge to the students: to participate in "Catch The Cause" not only by social networking but also by contributing minimal annual dues: which for them would be $5.91 a year. And to add an incentive, whichever Homeroom has the largest percentage of sign ups of students in addition to their adult family members (19 years +) at $9.91, younger brothers and sisters (1-11 years) at $1.91 and pet dogs at $2.91 (to support Responder K9's), that Homeroom will be rewarded with a Doughnut Party during their Homeroom time on Thursday, sponsored by OS91!!! YAY!

At the end of the Assembly, The Flight Of Challenger, the American Eagle who flies at the SuperBowl, World Series and Presidential Inaugurations, and who flew at OS91's 3rd Annual Tribute to Honor America's 1st Responders in Orlando in 2010 was shown http://www.os91.com/events/2010tributeeventupdate.php 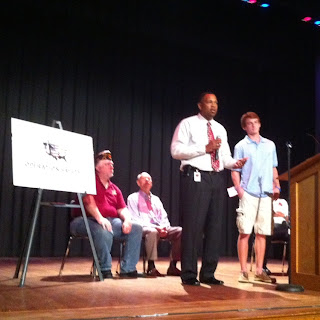 Mr. DeJarnett speaks on stage
Mason, Student Vice President of "Youth Alive" wrapped up the Assembly and Mr. DeJarnett joined Mason, Ed, and the Responders on stage, commending Mason for all that he did to make all  this Assembly happen. 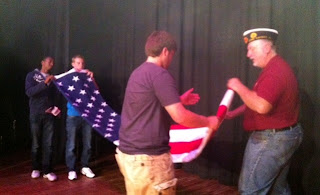 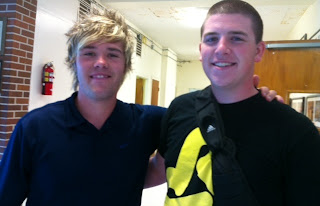 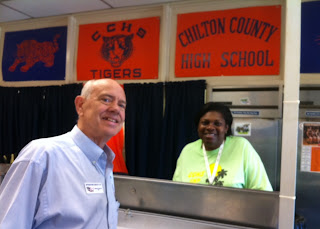 Ed with Sarah in school cafeteria
After Assembly and clean up we joined cafeteria staff, sharing testimonies and Psalm 91 books and cards. It was very special!
Posted by Operation Safety 91 at 9:35 PM