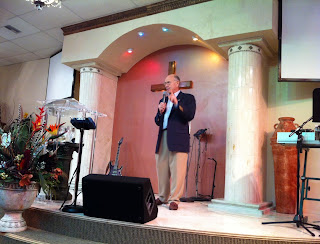 OS91 announces pre-launch of "Catch The Cause"
Today a multiple Event took place at our premiere partner Church, Christ Family International (CFI) Church (cfichurch.com) in Port St. Lucie, FL! CFI's Pastor Gerry Khourie had invited OS91's Spokesperson, COL Danny McKnight, US Army (Ret.) of "Black Hawk Down" fame to preach at both services. Combined with this, Operation Safety 91 announced the pre-launch of its new campaign, "Catch The Cause - Spread The Flame". "Catch The Cause" for short, will take the mission and vision of OS91 across America through social networking making people more aware of the risk Responders assume to protect, rescue and defend us. Our goal: 100,000 partners by December 31, 2012. To view the service(s), go to cfichurch.com and click on the tab in the upper right hand corner "Watch Services Live" for the two archived Services of March 18. 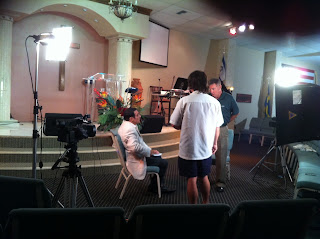 Set up for filming the night before
OS91 Founder Ed Ganster and his wife, Mary, came to Port St. Lucie Saturday afternoon for a filming with COL McKnight of the introductory "Catch The Cause" video, and at the same time, COL McKnight was filmed in an interview with Pastor Gerry Khourie for a new show being developed by Scott Smith, the videographer who filmed OS91's 3rd and 4th Annual Tribute to Honor America's 1st Responders. In case you have not viewed the 7 minute Highlight Videos of these Tribute Events, you will want to watch them right now! We appreciate you, Scott!
3rd Annual Tribute: http://vimeo.com/19228265
4th Annual Tribute: http://vimeo.com/31306477 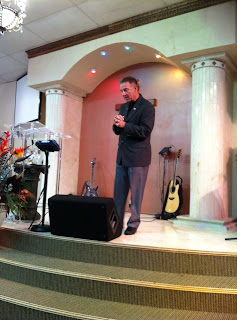 COL McKnight spoke at both Sunday Services at CFI

COL McKnight spoke from his heart on Sunday morning at CFI, sharing himself, his journey, his beliefs saying, "My faith in our Lord Jesus Christ is the most important thing in my life." He named his talk: "God promises a safe landing, not a calm passage" citing his surviving the Battle of Mogadishu and other close calls as "God's Will".


Recently returning from his second trip to Afghanistan in 3 months, visiting our Troops right in the heart of battle, COL shared the message he brought them, Isaiah 41:10, "Fear not; for I am with you: be not dismayed, for I am your God: I will strengthen you: yea, I will help you; I will uphold you with My right hand of righteousness." Also, pulling out his wallet to show his own Psalm 91 card, COL McKnight shared his own personal belief in Psalm 91, God's protection, and that God answers prayer. 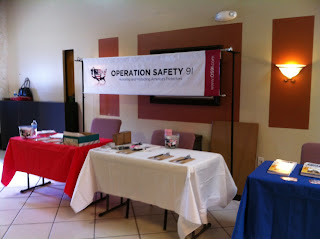 Tables for sign up for Catch the Cause and COL McKnight's new book
http://www.dannymcknight.com/bookdvd.htm 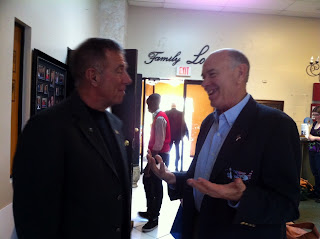 COL McKnight and Ed sharing after the Services
One of OS91's greatest honors is having COL Danny McKnight as our National Spokesperson. COL speaks over 80 times a year, spending over 220 days each year on the road speaking to 1st Responders: Firefighters, EMS, Law Enforcement and Military. It is so obvious that God made him a Divine Connection for OS91 to reach all those Responders with the message of Psalm 91 and God's Protection. COL takes the Psalm 91 cards with him everywhere he speaks and, in fact, himself donated the funds for the last batch of 50,000 cards! And in only 3 weeks, 39,000 of those 50,000 cards are distributed!

The response of the congregation of CFI Church was phenomenal, led by their Pastors, Gerry and Donnelyn Khourie and their two children, Canaan and Destiny. All four of them signed up as "Catch the Cause" partners, leading the way for their Congregation who responded with great enthusiasm as well! The partnership of CFI has been so significant during the past 2 years that they have earned our title as OS91's PREMIER Church partner. Mary addressed the congregation at the end, thanking the people for their partnership with Operation Safety 91 saying that "together we can do more than separately"!

More to come about "Catch The Cause"...2 Launch Events coming up next month:
Details will be announced as well as Vouchers for you to download for the Doughraisers will be on our website OS91.com in March. 20% of orders whether dine-in, take-out, or commercial delivery will be donated back to OS91 by UNO's Chicago Grill. We hope you will enjoy some delicious eating next month at UNO's in Melbourne and/or in Winter Garden and present a voucher to help us help Responders! And spread the word!
Posted by Operation Safety 91 at 10:51 PM