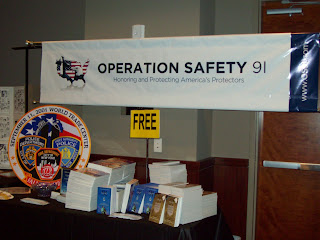 Winter Garden Remembers 9/11
Winter Garden's Remembrance of 9/11 on this 10th Anniversary memorial week began with many patriotic citizens coming today to view the tables lining the walls in Winter Garden's City Hall. This Tribute called "Remembering the Heroes", those whose lives were sacrificed on 9/11/2001, is an exhibit in the Council Chambers which will be running from Monday, 9/5 through Sunday afternoon, 9/11. 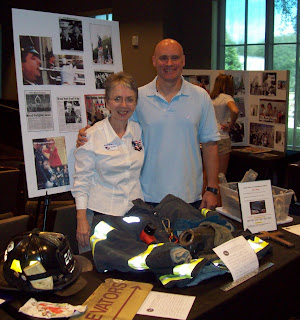 FDNY Jimmy Brown in front of his uniform, helmet and
other memorabilia of 9/11
Former FDNY Jimmy Brown of Ladder 10, Tower 10, of the Twin Towers Fire Station, was interviewed by FOX News this morning in the Council Chambers and told his 9/11 survival story.  Jimmy is travelling to NY tomorrow morning accompanied by Winter Garden Battalion Chief Brian Sanders and 2 Winter Garden Police to bring down a 700 lb. 16" flange I-Beam from the Twin Towers which will become a Memorial in the city limits. 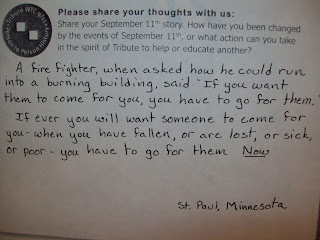 Also on display are personal thoughts from Americans, civilians and non civilians: poignant, thought provoking, pain filled. This Firefighter shares why he does what he does. 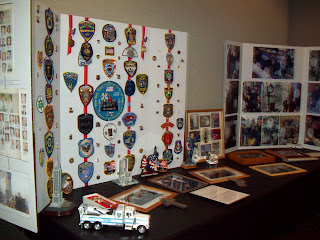 
Former NYPD, also responding to that tragic call 10 years ago was Marvin Vasqquez, who later went on to be President Bush's personal ambassador to go around the U.S. for 1 year speaking about 9/11. 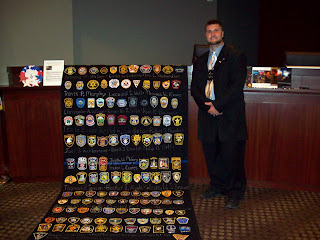 CH Dennis standing besides his display of patches of
Fallen-in-the-Line-of-Duty Police in U.S.


A big Thank You goes to former NYPD Norman Rein, who spearheaded this Exhibit! OS91 is honored to be associated with men like Norman, Marvin and Jimmy, part of the tremendous rescue effort at 9/11. "We will never forget!"
Posted by Operation Safety 91 at 3:49 PM