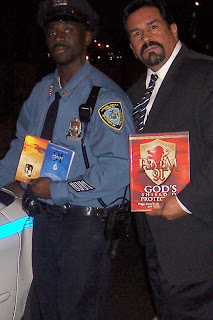 Officer Stevens, NYPD presented with Ps 91 books
by Al Castro, President of NY Regional Police
We further engaged in conversation as a team as we moved forward in placing a Banner for the Fraternal Order of the Police in position and a Banner for the for Exploited Children. There was a table set before us that enabled us to place Psalms 91 Testimonies and God Shield of Protection, Those Who Trust in the Lord as it related to the furthering of the ministry that has been assigned to our hands.

At the 9:30PM hour we had concluded our session and were in position to answer any questions that were before us at this time our staff and along with President Al Castro, answered any and all questions as it related to Psalms 91 Ministry and the Fraternal Order of the Police and the Upcoming Chaplains Training Class.